Everyone — including Warhol — loves QUENTIN CRISP


Phoned Quentin Crisp to invite him to a movie.

Woody Allen’s “Everyone Says I Love You” was playing at the Olympia Theatre on Broadway at 44th Street for a one-week award-season run (earning a Golden Globe nom for Best Motion Picture Musical or Comedy).
Quentin answered the phone while moaning in pain, “Owwww, owww! Buggers! Owww….”
He injured his hand while trying to break a fall.
Quentin whimpered as he reached for his planner, which he calls, “the sacred book.”
He selected Wednesday and talked about bus routes. I said I’d splurge for a cab.
Quentin gave me his Bowery address: 46 East Third St.
I was to call from the corner payphone at Second Avenue and meet him on the sidewalk.
Wednesday, December 11, 1996
Cruddy day. Wet, cloudy and 40 degrees. Hit the gym. Bought two General Nutrition Center protein bars, $2.50.
Walked to the Bowery and called Quentin from the corner phone, 25¢.
His swollen hand was atrocious.
I helped Quentin put on his coat. And after crying in pain, he insisted that he was fine.
He regaled me with a story about a previous attempt to treat his injury.
While being interviewed by the Australian version of “60 Minutes,” a lady acquaintance — whom Quentin called “the fiend” — overstepped her concern.
She called 911. And the ambulance “kidnapped” Quentin.
The 88-year-old dreads hospitals and thinks nurses are especially creepy.
In a prophesying voice, Crisp whispered to me, “Once you go into a hospital, you never come out alive.”
He explained the ambulance took him against his will with "60 Minutes" following in a limo.
Inside the ER, he saw a chance for a quick exit and fled — with "the fiend" and assorted medical personnel chasing after.
He spotted the Australian crew and escaped in their limo.
•••
While I exited our cab, ($17) I asked the driver for a receipt.
Quentin leered at me and asked, “Why do you need a receipt?”
I explained, "I don't. I just like to track how I spend money.”
Quentin rolled his eyes.
He whined while climbing out of the cab.
Woody Allen matinée: $13.50. $8.50 for me; $5 senior admission. 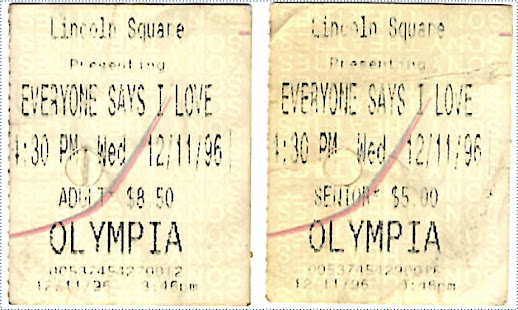 Before the movie, we ducked inside Barnes & Noble for coffee, $3.50.
The Olympia was almost sold out. So we sat in the very front row.
Afterward, I apologized my ass off to Quentin: Sitting that close was hell on my neck and exhausted my eyes.
I wish we'd seen “Breaking the Waves” together instead.
•••
Sunday, January 5, 1997
KUSNER: Howdy, Quentin. This is Dan Kusner. We saw Woody Allen’s “Everyone Says I Love You” together.
CRISP: Oh, yes.
How're you doing?
I’m fine. Thank you.
Did you have a good birthday?
Yes, I did.
Your big day is on Dec. 25. What’d you do?
On Christmas Day, I went to some people’s apartment on Fourth Street, because it was nice and near.
But on the day before, I had a party in Chez Suzette, which is a rather posh restaurant on Restaurant Row on 46th Street. It was very nice. 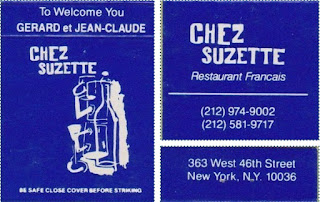 Who went to your party?
Almost everyone.
Any big celebrities?
No. Mr. Bay— who arranged it — asked all sorts of celebrities. But they didn’t come, of course.
How’s your hand?
It’s no better. But it’s all right when I don’t use it.
Are you in any pain?
Not when I don’t use it. Just lying about ... it doesn’t hurt anymore.
Sill gonna cut it off?
Well, I might have to because it’s so useless.
Have you seen a doctor?
No.
Not going to step foot into a hospital, are you?
Eek! Never.
•••
Can I ask you a bunch of questions?
Yes.
Can you define “family values?”
Family values are a complete waste of time. Everything that goes wrong in one’s life is the result of their family.
How was your relationship with your father?
Terrible.
Did he name you Quentin?
No. That was my own name. My birth name was Denis.
Do you know who you were named after?
I don’t think I was named after anybody.
Your real name is Denis?
Yes.
Denis Crisp?
No, Denis Pratt. You can imagine how quick I was to get rid of that.
What was the inspiration of the invented name Quentin Crisp?
It was given to me by various people.
How young were you when you became Quentin Crisp?
About 25 or 26.
When was the first time you came to America?
In 1977. I was 62.
And you just celebrated your 88th birthday, huh?
Yes.
•••
You told me that in order to rule the world, that I needed to move to Manhattan.
Yes. That’s right.
When I do, can I come stay at your apartment?
Very well. But it’ll be too small. I’ve only got one bed and one chair.
Do you think smaller living spaces are kept cleaner — like how a dog will crap anywhere but always keeps its kennel clean?
Well, I don’t think you’ll be clean here. This place hasn’t been cleaned in 15 years.
You don’t even wash the sink out with, like, Comet cleanser or anything?
Oh, no. Never.
•••
Do you think it’s better for artists to be motivated by poverty to produce their work?
Well, that was the theory. But I don’t think it works. I think if you’re too poor, you’re hopeless.
Do you have any financial advice for me?
Money is for saving, not for spending.
Do you ever give money to poor people on the streets?
Only quarters. Not real money
•••
Have you ever heard of the British singer named Morrissey?
No.
Will you publish any more books?
I don’t think so. The paper for which I worked [The New York Native] has folded. So I can’t produce any more diaries.
Are your collected diaries going to be published?
They’re published — in England.
Currently?
Yes.

When was the last time you kissed someone?
Kissed someone?
Yeah, like, really planted a juicy wet one a hot dude.
I don’t think I’ve ever kissed anybody.
You’ve never kissed ... anyone?
I don’t think so.
Why?
Well, kissing is not a good idea.
You’re insane. Kissing hot dudes is the best.
Well, I’m afraid Mr. Bogart and Miss Bergman were unreliable authorities — that a kiss was never just a kiss.
•••
During our recent rendezvous, you explained to me that you think AIDS will end up being just a fad.
Yes, it will.
When I first got here everyone had amoebic dysentery. It was a great scare. Everyone was going to die of it.
When that faded, everybody had hepatitis. Then that passed.
Now they have AIDS. It too will pass.
Is amebic dysentery sexually transmitted?
I don’t know. But everybody had it.
•••
What did you think of the movie “Everyone Says I Love You?”
I liked it. I thought it was very funny.
What did you think of Goldie Hawn?
She’s good. She’s very lively. I like her.
Did you see “Evita?”
Yes. I saw “Evita.”
What did you think of it?
It’s a bit monotonous. Because it becomes a political film. But Madonna’s very good. She looks exactly like Eva Perón.
What did you think of “Showgirls?”
I liked Showgirls. I don’t know why everyone was against it.
What'd you like about it?
The fact that it was slick. That it had a story. That it moved fast.
Have you seen the movie “Ridicule?”
No.
Have you heard about it?
No.
Oh, Quentin, it’s good. It’s set in Versailles during Louis XVI. It demonstrates how success is measured through wit. The clever dialogue is snappy. It's about eviscerating and mocking others in public.
Hmmmmph.
Have you seen "Shine?"
No.
Have you heard about it?
Yes.
Have you heard about “Breaking the Waves?”
I’ve seen “Breaking the Waves.”
What’d you think?
It’s quite nice but very kinky.
Do you ever rent movies?
Never.
What’s your opinion of the new “Romeo + Juliet” movie?
I haven’t seen it. But I think it’s a great mistake.
How come?
Well, when you put teenagers into Shakespeare — the fact that they’re wearing torn jeans and saying all that elaborate poetry is just crazy.
You don’t find teenagers very poetic do you?
No. I find them wretched.
We talked about the movie “I Shot Andy Warhol.” I asked you about meeting Warhol. You said whenever you saw Warhol out, you’d try to engage him into conversations. But you couldn’t get much out of him, right?
Nothing.
I found the passage in his diaries where Warhol wrote about you.  Can I read it to you?
Oh, yes!

Did you like it?
Lovely.
What did you think of Letterman?
Well, he’s just like that.
Do you think he’s an ass?
Well, as you know, Miss Shirley MacLaine told him that he was an asshole. And he is.
Would you ever go on his show again?
Not if I could avoid it.
•••
You believe homophobia is natural.
Yes. Homosexuality is strange. It’s unusual. It’s not normal. I think it’s natural that people are afraid of it and don’t like it.
Do you think you’ll be considered a significant historical figure?
No.
Maybe a historically significant gay figure?
I don’t think so.
What about in the legal sense? When you successfully defended yourself in court?
Not really.
I live in Texas. And the only copies of “The Naked Civil Servant” that are owned by The University of Texas at Austin are placed in the school’s very posh law library. Your case has merit — especially in consideration of civil rights. Weren’t you arrested and harassed by the police for being eccentric because they didn’t like that you refused to present yourself as a man?
I was accused of soliciting. And I said that I didn’t do it.
Well, Quentin I hope your hand feels better.
Thank you.
I’ll be in touch with you again soon.
Lovely.
You take care.
I will. 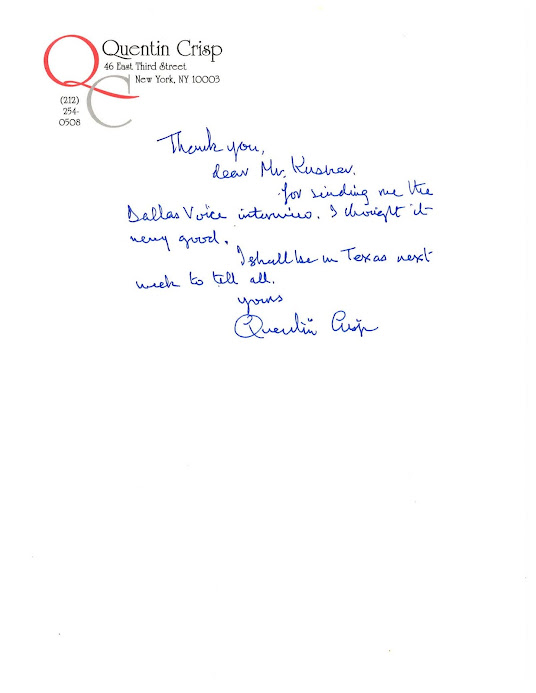